We’ve been a SRP customer and supporter for years now! If you’ve been a long time Rafterhouse follower, you may recall a few years back we were featured in a full-length television commercial for SRP. It was quite the experience to shoot! We ran through scene after scene as we recited lines, re-recited lines, and then for good measure recited them again all in the name of “getting the shot”. The television commercial aired in late 2016 and ran in to early 2017. One minute you’re quietly and mindlessly watching television and the next minute your SRP commercial pops up… quite surreal to say the least!

Three years later we’re partnering with SRP again to help promote the benefits of LED lighting. And believe me friends there are many benefits. But for the sake of this feature, I’ll share a crazy little tale about how the switch to LEDs helped save my company, my foot, my pocketbook, my marriage, among other things important to me.

In the early years of Rafterhouse, the stresses of starting my own company would lead to some sleepless nights tossing and turning as I struggled to leave behind the details of my workday. Inevitably the tossing and turning would get the best of me and I’d climb out of bed at some rather ungodly hour of the night to stagger down the hallway barefoot, one eye open, bouncing off the walls like a toddler, just to get a quick sip of water. No big deal, just a sip of water, right? Wrong. There is clear and imminent danger lurking ahead in those darkened hallways. Danger in which I’ve encountered on a couple prior occasions in the past and to which I still struggle to dignify with a more creative and endearing name, so I will simply and quietly call it….

Yes, you know what I’m talking about if you’ve so acutely experienced the pain of your bare foot followed by full body weight pressing down on a little plastic Lego in the cover of darkness.

Ok, now that we’ve broken the ice with the commonality of pain, I can continue.

As a student of my past mistakes, I quickly learned to flip on some lights… actually not some lights, ALL the lights… to help navigate the treacherous seas, better known as my hallways, and avoid “the Lego”. The light seemed to calm me as I inched closer to that sip of water. But what I didn’t take into consideration is that lighting accounts for 10% of energy usage in the Valley. And switching to LED bulbs can help reduce energy consumption by 75% compared to standard incandescent bulbs – a switch I hadn’t yet made. It’s a staggering statistic, but if every American chose to replace just one incandescent bulb with an LED, it would reduce greenhouse gas emissions equal to that of about 800,000 cars!  So now I’m at a moral crossroads as every incandescent bulb that gets switched on is negatively impacting Mother Earth and at the same time costing me some real coin. The clock’s ticking… Mother Earth is frowning, and my wallet is feeling lighter. But my foot would be safe.

So, as I inched closer to that sip of water a switch to LEDs sounded like something I needed to research a little more when I found some spare time. But what I also failed to consider is now that I had flipped on all the recessed can lighting the heat gain from the incandescent bulbs was becoming overwhelming… I felt like one of those rotisserie chickens in the grocery store deli section. Friends, it’s with regrets and open honesty, that I disclose within this circle of trust better known as a blog, that I was quickly closing in on a case of the night sweats. This is a safe space, right? Nobody really wants to get sweaty while trying to get a sip of water simply because they can’t fall asleep due to the stresses of their workday. But that’s exactly what it’s come down to guys. So now I’m marinating deeply in sweaty thoughts that LED bulbs don’t produce the same intense heat as incandescent bulbs… probably time for me to give deeper consideration to the switch to LEDs, right? But wait, it gets worse: incandescent bulbs also attract more bugs than LEDs due to the fact that they emit more UV light and infrared radiation which is inviting to bugs. And my wife can’t stand bugs. Never has. Never will. What if I come back to bed covered in bugs…? Will she still love me?

So, at this point in my quest for a sip of water, things have really unraveled… I nearly lost my foot due to a Lego disguised by the veil of darkness, I had switched on ALL my incandescent lighting which is now irritating Mother Earth, draining my wallet, and creating a heat lamp effect that’s giving me the night sweats. And the bugs guys, the bugs are coming, hundreds of them, maybe thousands… and oh my gosh my wife hates bugs.

So, I’m at a crossroads… I either close down my company and hope I sleep like a baby from now on, or I keep Rafterhouse open, switch all my incandescent lighting to LEDs, save a ton of money, avoid the night sweats and the bugs, save my marriage, and get that sip of water. I think you know the right answer.

By the way… I’ve also learned that LEDs can improve sleep by emitting warmer colors of light, which stimulates melatonin during the day. So, they got that going for them also!

To learn more about the benefit of LED bulbs, and to find out more about rebates on LED bulb purchases, head on over to the SRP Marketplace. 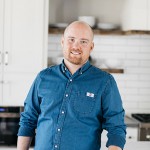 Posted by: Austin King  /  Categories: Current Situation
Comments Off on How LEDs helped save my company, my foot, and a slew of other things.